The fact that each person's skin color is different is mainly due to genetics. This causes the different composition of the skin pigments, resulting in different skin tones caused by the melanin pigment. And when exposed to sunlight for a long time, the skin will become darker, which results in a change in skin tone. This is caused by the change in the number of skin pigments which result from the changes of the enzyme that stimulates the synthesis of melanin pigments.

In our epidermis, in addition to keratin cell, melanocyte is also one of the component. Within the melanocyte, there is a substance called melanin or melanin pigment contained in a bag called melanosome. As a result, melanocytes are distributed throughout the skin layer, therefore seen as various skin tones. There are 3 types of melanin pigments:

1.  Eumelanin
This type of melanin pigment is brown and black, most common in dark skinned people.

2.  Pheomelanin
There is a red or yellow pigment, which is more common in white people.

The truth you should know about glutathione.
'Glutathione' is an important antioxidant that the body can produce by itself from 3 types of amino acids which are cysteine, glutamate and glycine. The glutamate and glycine are already abundant in the bloodstream. Glutathione is also obtained from protein foods, egg, and milk, as well as fruits and vegetables such as asparagus, avocados and walnuts. The body stores the produced glutathione in the liver. Glutathione can be found in every cell of the body and helps the body absorb more vitamin C and E.  In addition, glutathione also plays a role in inhibiting tyrosinase enzymes, change the production of eumelanin to pheomelanin.

Several studies found that glutathione cannot be absorbed from the stomach because it will be broken down and excreted through the intestines. Therefore, taking glutathione tablets does not benefit at all. For injection, if glutathione is given in large quantities, it can result in life-threatening        .

Nutritional value for whitening skin safely.
L-Cysteine
It is a type of amino acid that the body can produce by itself but in small quantity and can be increased from eating protein foods.

Amla extract is a rich source of high vitamin C. It also contains polyphenol antioxidants. Therefore, it can be considered that Amla extract plays a role as a strong antioxidant,

Grape seed extract
There is an important substance called “Oligomeric Proanthocyanin” or OPC, which is a group of bioflavonoids. 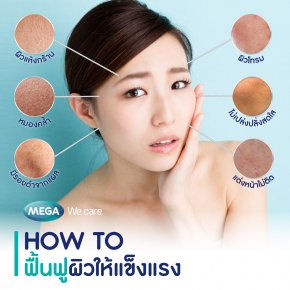 Turn your skin to a glowing and bouncy youthful skin with collagen hydrolysate.